Increasing numbers of people are performing mobile work – according to IDC, 37 per cent of office workers completed tasks on the move in 2015. They need local, useful decision support that makes efficient use of applications and data that are already present in the company. The choice of the right app is at the core of a mobile BI strategy.

Smartphones and tablet PCs are bringing significant changes to communications structures within companies. More and more employees are working on the move. They want direct access to appropriate decision support tools when visiting customers or suppliers. However, to achieve this it is not enough just to provide powerful mobile devices. A well thought-out strategy for application implementation is vital. It is the only effective way of preventing the development of new silo solutions that cause additional maintenance and administrative effort.

The needs of mobile users are crucial for strategy. Anyone who spends most of their time at a fixed office workplace can also use BI systems there. In contrast, mobile users benefit when they can access all the data they require independent of time and place. This allows questions at a customer site or from other members of the team to be answered promptly and accurately. 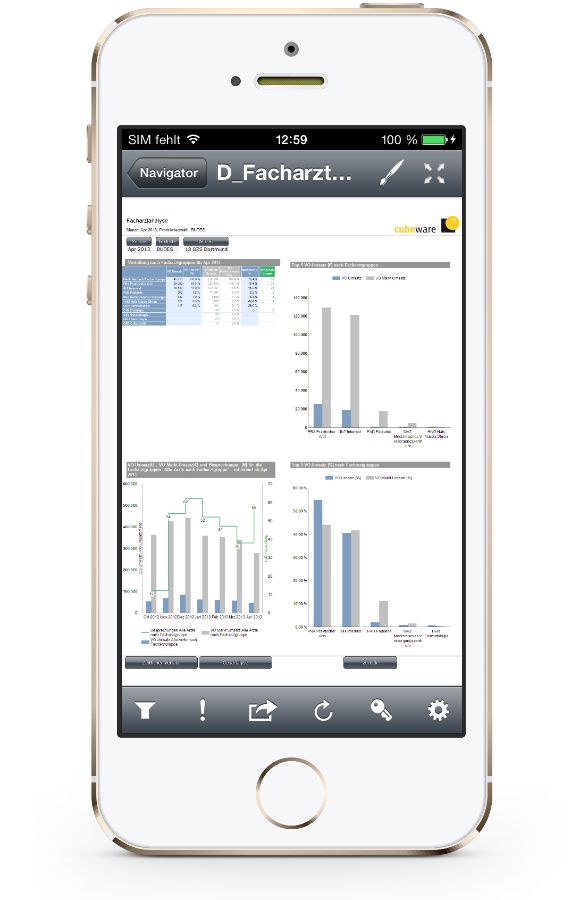 What is essential is that business intelligence – whether mobile or stationary – is delivered from a standard platform. Mobile BI solutions in particular must be able to integrate with this platform seamlessly as well as independently of the mobile operating system, and also to communicate with it. Nevertheless, it is important to understand that mobile BI solutions are no substitute for classic BI systems, but rather serve their own application scenarios. For this reason, their functionality must also take account of mobile deployment scenarios and may therefore differ from stationary or web applications in term of their functional scope. One example of this might be the integration of the GPS chips used in mobile devices with the mobile BI solution.

At the same time, mobile applications should be tailored to the operating system concerned, i.e. they need to be native. This begins with their appearance and operation and extends to the information and design concept of the operating systems. If these aspects are ignored, mobile BI apps can often seem like a foreign body on the device. This has been proven to lower user acceptance. Hybrid approaches also have to contend with this problem. It should also be possible to adapt a BI solution to the requirements of specialist departments in order to allow different perspectives on data. A further important aspect is scalability in order to allow continued growth to meet future requirements.

Mobile BI apps present key business data on mobile devices. Depending on the design of the visualisation component, apps can interact with reports at different levels of intensity – through to a proprietary display format for the mobile system to display image files and PDFs. Interaction possibilities are very limited if cell contents in a report form cannot be copied and inserted elsewhere. This is a disadvantage as functions like drill-down or the integration of data at a higher level (roll-up) will then no longer work. Mobile BI is also ideal for presentations. BI apps should come with presentation tools such as a whiteboard.

The use of export functions for important applications is a contentious issue. Their absence restricts usability. PDFs or Excel tables based on data from the mobile device can then no longer be easily presented to colleagues during a meeting. It is also a drawback when exported data cannot be sent or transferred to cloud storage. Nevertheless, it is difficult to monitor where data are distributed via the export function, and many companies shy away from this. A mobile device management (MDM) system should be deployed in order to exclude the possibility of misuse. It is also important to raise the awareness of a company’s employees for data privacy and protection through training sessions and workshops. The importance of deploying MDM solutions is growing anyway owing to the trend towards using private devices for business purposes (BYOD). Here, too, it is important to ensure seamless integration when making choices.

Several different possible mobile BI app solutions meet these requirements, but they all have different strengths and weaknesses. The best option for a particular case can only be decided on an individual basis.

In the pipeline: offline reporting and social media integration

Mobile BI technologies are continuing to develop at a rapid pace. For example, vendors are working on new features for offline reporting. The memory of mobile systems is often too small when apps access complex data models in the background for seemingly simple reports, and downloading gigabytes of data takes too long. Current applications often only store screen shots, which puts paid to any further analytical possibilities such as drill-down or filtering. Solutions that allow decisions even without Internet access but without exceeding the capacity limits of transmission networks and devices make more sense.

In order to answer even complex ad hoc queries, such solutions take an OLAP environment as their starting point, enabling access to still untapped data sources and new table combinations, instead of trying to replicate the powerful functions of server-based reporting tools.

The integration of social networks, whose importance continues to grow, plays a special role here. Focus should be placed on enterprise-class tools like Yammer, Chatter or Jive, which can be used, for example, to communicate comments on reports. The integration of mobile BI with business analytics, instead of mere ex-post analysis, also enables reliable forecasting.

Google Glass and on-board computers in cars suggest that mobile information delivery is only at the start of its development. The incorporation of the M7 chip, which can collect data from all types of sensor, into the latest generation of Apple’s iPhone opens up whole new perspectives. Data can be passed on via these interfaces, enriched with information from other app-capable devices before being further processed. This synergy potential can be expected to produce a great many surprises.